Flunking out of (Electoral) College 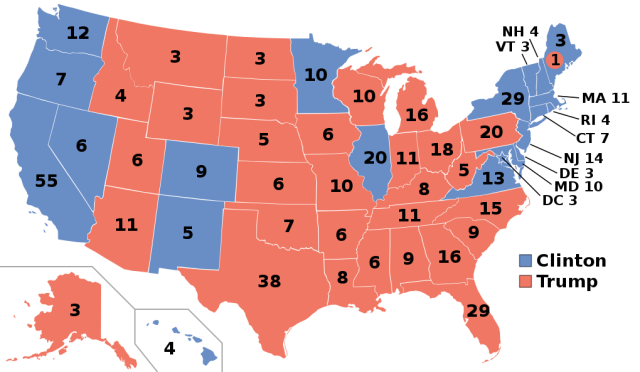 The people have spoken. It was close, it was messy, but by a narrow (yet clear) margin, the people chose Hillary Clinton as their next president.

However, an outdated tool of racial oppression has overridden the will of the people.

Donald Trump will become the 45th President of the United States while losing by at least 1 million votes (as of this writing), and possibly as many as 2 or 3 million, once all the votes are counted.

So, how is it that the candidate whom a solid plurality selected as president will not be allowed to take office? Why do the people directly choose so many government positions in America, but not the presidency?

Even for a country governed by rules from a 227 year old document, the Electoral College is something of an anachronism. Like many of the original anti-democratic aspects of our national foundations, it was designed to enforce the societal superiority of the white landowning elite.

“The Founders,” (which sounds like a neo-Celtic rock band) while paying lip service to notions of equality, generally agreed that political matters were best decided by the wealthy and educated. You know, “the elite.” To be fair, it wasn’t completely black and white. They were concerned with the rights of people to a point, and quite worried about the scope and focus of political power.

That said, the Electoral College wasn’t created only due to concern about power being concentrated in the most populous states, as many have claimed. It was also about propping up the institution of slavery, which was the style at the time.

There were other factors, to be certain. Individual states enjoyed a greater degree of autonomy then. There was some worry that more populous states would unfairly dominate the smaller ones. There were also logistic issues with collecting a national popular vote in a vast and largely agrarian country, back when the fastest method of long-distance communication was messenger on a horse. Spreading information (as well as collecting votes) to the people would be difficult.

But when it came down to it, the chief point of the Electoral College was always slavery. It’s just like the origins of the Civil War, no matter what neo-Confederate revisionists try to tell us.

In the original design of the College, Northern states with more free persons were weighted more lightly than the Southern states with large slave populations (but relatively few free persons). Essentially, they counted slaves as people (partly) for the purpose of calculating the Electoral College, but still denied slaves actual votes. This was the “three-fifths” compromise. Technically the three-fifths rule was specifically designed to help decide House of Representative numbers, but the two go hand-in-hand. The EC total for each state is simply the number of Representatives combined with each state’s two Senators.

The end result was that slaves were used for electoral purposes while still being disenfranchised. This allowed smaller states to enjoy a larger percentage of electors, as well as big slave states like Virginia – which had a whopping 13% of the total Electoral voters at the turn of the 19th century. Virginia became the largest state in the EC, mostly thanks to 40% of its population being slaves. It actually had fewer free citizens than New York, but 5 more Electoral College votes (by 1804).

James Madison himself noted at the Philadelphia convention, “The right of suffrage was much more diffusive in the Northern than the Southern States; and the latter could have no influence in the election on the score of Negroes.”

This artificial finger on the electoral scales created an electoral issue very early on. Thomas Jefferson was elected in 1800 thanks to the margin that the slave population added to the Electors. If there had been a direct election of legal voters, then John Adams would have won re-election that year, and Jefferson would have to have waited another 4 years for a chance of becoming the 3rd President.

Had Donald Drumpf, wealthy gadfly and builder of houses of ill repute, existed in the late 18th century, he would have loudly declared the process to be rigged. “This is a malodorous accord of venality!” He would have published pamphlets claiming Jefferson was born in the Leeward Islands.

Eventually, slavery disappeared in the US. Sort of. But the states were still not provided proportional representation in Congress (and therefore the Electoral College). After every national census, population changes *are* taken into account, and representative numbers are shifted to follow these changes. But the shifts still retain biases in favor of smaller states.

What about the people who argue that these sort of artificial limitations are positive controls on power concentration? They say, “this is a republic, not a democracy.”

Well, kind of. What we have at most levels is a representative democracy. We directly elect officials who will then decide the laws. The more informed we are about the officials we elect, the more we can impact the laws they decide. It’s an imperfect system, but it reaches the best combination of utility and fairness.

At the local and state levels, sometimes direct electoral decisions are implemented. Laws can be decided by the citizens, depending on the situation and scope. For national legislation, though, it makes sense to select representatives who handle laws as a full-time (ish) job.

But even then, winning that voting power for the people has been hard fought and sluggish. In the era of Adams and Jefferson, only around six percent of the nation was eligible to vote for anyone. Local officials, state legislators, and members of the US House were chosen by “the people.” As long as the people were land-owning white men.

Over the years, it opened up more. Eligible voters eventually were allowed to cast ballots for Senators. “The people” eventually included black men – legally, and then eventually practically. Women could legally vote nationally in 1920 (earlier in some states). Efforts were made in the 1960s to make it easier for people other than white men to vote. The voting age dropped to 18 in 1971. So now, as of 2016, more than 200 million Americans are eligible to vote. And we can vote for national Senators and Representatives. We cast ballots for the President. But we still don’t actually get to *select* the President.

The most powerful office on the planet is one that the American people still do not directly choose. Yes, precedent has dictated that the winner of the popular vote is usually who the electors choose. But in four different Presidential elections, the electoral vote defied the will of the people.

An extra anti-democratic layer is in place that skews the intent of the citizenry.

The current disproportionate representation doesn’t “ensure that California doesn’t tell Wyoming what to do.” Instead it means that someone living in California has a vote worth a third of a Wyoming resident. Never mind that location within the Republic should have no bearing on quality or quantity of representation. Well, unless you live in Washington DC. Then you’re hosed. But that’s a whole ‘nother debate.

At this point in American history, the argument, “Someone from a more populous state shouldn’t dictate elections to those in smaller states” is meaningless. The quasi-confederation this nation started as was repudiated in 1865. States aren’t as important as people. Instead of a “tyranny of the majority,” we get an actually-unfair “tyranny of the minority.” People within smaller states get more say in selecting the highest office in the land than those in larger ones.

One person = one vote is the only rational option. That’s how we elect every other official. Why should we lose the representative part of our representative democracy for that one position?

Is it really more fair and free that a person in Wyoming or North Dakota can overrule someone in California? Why would we worry about their location? We are supposed to be a nation operating on the principle of equal rights for all. To that end, true equality would entail a direct election of the president. Everyone, regardless of race, gender, ability, orientation, ideology, religion, or location should have an equal say.

Until they do, we can’t completely call ourselves a democracy or a republic.

4 Responses to Flunking out of (Electoral) College