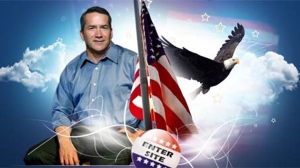 Jody Hice, a Baptist minister and radio talk show host, is not actually an elected official – yet. I suppose he’s not the best choice for my first profile in this series, as he has yet to win public office. However, Hice won the Republican primary in the 10th Congressional district in Georgia on July 22. While his victory in the general election is not guaranteed, it is quite likely in a heavily Republican district – one of the more conservative districts in the nation.

Despite the overall ideology of the 10th district, I will argue that voters should reject Jody Hice’s election attempt this November. It’s not just political leaning. Mr. Hice isn’t simply a conservative Republican. He has made statements that are downright horrifying, moreso that he has an excellent chance of being selected to write this nation’s laws.

Why is Jody Hice so unelectable? For one – religion. Yes, he’s a Baptist minister. No, that shouldn’t automatically disqualify him from public office. However, he makes it clear that the US government should be run on the basis of conservative Christianity. If one needs to be told why this is scary, then one shouldn’t read any further. Actually, yes, one should.

Mr. Hice stated that Islam should not be protected under the 1st Amendment. Why is that? Oh, he thinks it isn’t a religion. From his book; “Although Islam has a religious component, it is much more than a simple religious ideology. It’s a complete geopolitical structure and, as such, does not deserve First Amendment protection.”

Yeah, he said that. So, if you are one of the 2.5 million or so Muslims in America, don’t expect much respect for your constitutional rights. As far as he’s concerned, you don’t have them.

His extreme religious beliefs also inspire quite a bit of moronic thinking regarding LGBT individuals. The writer Michael Swift wrote a satirical piece mocking the “gay agenda” that terrifies so many people suffering from cranial-rectal inversion. Apparently Mr. Hice is unaware of the concept of satire and used that piece as proof that gay people in America are attempting some sort of takeover. From “It’s Now or Never: A Call to Reclaim America;” ”These shocking words by Michael Swift have been considered part of the ‘gay manifesto’ by many, and reveal the radical agenda that is currently threatening our nation…One need not look very far to discover the overall agenda of militant homosexuality, and its attempt to permanently change American society.”

Yeah… so much for critical thinking, or even just a sense of humor. Or, more likely, he was aware of the satirical nature of Swift’s essay, as the first sentence in the essay explained the joke. So, really, he’s just a lying bastard, fighting desperately to prop up his political agenda.

Okay, so what else? He believes the 1st Amendment doesn’t apply to the second largest religion on Earth, and that gay people want to take over America… to do what? Make us dress better? Drive Subaru wagons? Still, as silly as this sounds, is there any more reason not to vote for this guy? Why… yes!

He’s a lousy historian. He claims that the Whiskey Rebellion was a successful example of states nullifying federal laws. Here’s what he claims: “[T]he ‘Whiskey Rebellion’ of 1794 showed that civil disobedience and the refusal of some state officials to enforce federal law is effective. As a result, the ‘Whiskey Tax’ was nullified and the following elected cycle led to a repeal of the unpopular tax.” Thing is, the law that started the rebellion didn’t get repealed until 7 years after Washington crushed the rebels. The Rebellion was long over by the time the law changed. This is quite well-documented.

He also argues in favor of nullification in general, and believes quite strongly in the Confederate side of the Civil War, whitewashing the slavery debates, and going back to that hoary old argument claiming “it was about states rights alone.” To Jody Hice, states should and actually do have the ability to ignore federal laws they don’t like. The Constitution itself pretty much tosses this theory out the window, as does the outcome of the Civil War itself.

Okay, so he’s a religious bigot, he hates gay people, he has dubious Constitutional beliefs based on a poor understanding of history… but, c’mon, there’s gotta be more. Yep! Here we go…

Jody Hice’s response to the massacre at Sandy Hook Elementary didn’t go the pro or anti gun control route. Instead, he echoed the words of such pieces of human excrement like Jerry Falwell, when he blamed secularism for the death of 26 innocent people. “For decades here, we have been kicking God out of — obviously our schools [and] the public square [and] our entire nation,” … “this is type of thing that you get when there is the absence of God: evil.”

That’s right, Adam Lanza murdered 26 people because of the separation of church and state. A separation that many of our Deist (Madison, Paine, Jefferson) and quasi-atheist (Franklin) founding fathers vigorously advocated. Oh wait, that’s discussing history, which we already established is too hard for Hice.

It’s true, the general tone of the nation has been one of increased secularism, although that secularism has had many fits and starts, with quite a strong religious backlash to go along with it. And yet… crime, both violent and property-based, has steadily declined over the last 20 years. And, taking into account upticks in urban crime in the 70s and 80s, and obvious spikes in war deaths in the 1910s and 1940s, overall violence of all types has decreased pretty much every decade since the start of the Industrial Revolution. It could very well be that we… gasp! … don’t need God to be good! No, wait, that can’t be! Perish the thought.

So, Hice has said pretty much the same thing that turned most of civilization against Jerry Falwell just 13 years ago. And… he’s favored to win a seat in Congress. Wonderful. Is there anything else? Yes? Oh, goody.

Jody Hice also doesn’t think much of women. What a shock, right? He was asked about women becoming politicians. First of all, he was asked this in 2004. The 21st century. As if that should still have been a question. Nonetheless, he attempted to be magnanimous. “If the woman’s within the authority of her husband, I don’t see a problem.” So, for Rev. Jody, women running for office is fine – as long as she asks her husband’s permission first.

Wow, this list of ignorance is filling up fast. Anything else I can throw on the pile?

Yeah, let’s go back to guns and the Constitution. I’m currently working on a fairly lengthy post discussing the Second Amendement and what it actually means, as well as gun control in America. Suffice to say (for now), it was only since 2008 that there was any consensus in the Supreme Court regarding firearms as an individual right, as opposed to a more collective one. And even the 2008 Heller decision was a very close 5-4 vote, and the rather extreme cheerleader for the pro-gun side, Antonin Scalia, acknowledged that an individual right to own guns does not prevent specific restrictions. Really, only children, the NRA, and Texans interpret the 2nd Amendement as providing an absolute right to any and all weapons. And yet, here’s our buddy Jody: “It is my belief that any, any, any, any weapon that our government and law enforcement possesses, ought to be allowed for individuals to possess in this country.” Yep, so instead of getting a 12 gauge for burglar plinking, I should be allowed to own surface-to-air missiles. My neighbors are gonna hate me next 4th of July.

The United States House of Representatives is not exactly filled with intelligent, accomplished, thoughtful people. There are a few who could be described this way, certainly, but over the last decade, more and more voters keep electing their crazy uncle to the powerful lawmaking body. Those who run this nation, and are responsible for so much of how this enormous country works, are increasingly made up of hateful, ignorant ideologues. The state of Georgia has the chance to reject a man who believes that Islam is not protected by the freedom of religion, that gay people want to ruin America, that states have a right to nullify federal law, that the Civil War was not primarily about slavery, that the separation of church and state leads to children being shot, that women should be subservient to men.

I’m not holding my breath, but I’ll go ahead and say it – Georgia voters, please take a look at what this guy actually believes. And, after doing so, if you still think it’s a good idea to elect Jody Hice to the House, well… maybe we should go ahead and let you secede.

For more on Jody Hice, and what his election might mean, take a look at these links, on these fine websites: