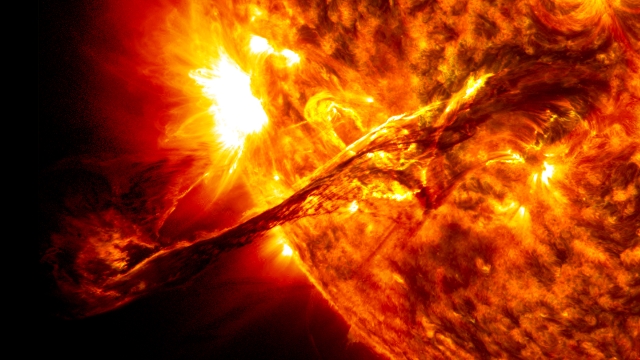 Our world will be consumed by the sun in a few billion years. As the nuclear fusion reactions within it run out of fuel, it will expand – possibly past Earth’s current orbit – and SPF 3 billion will become the sunblock of choice for whatever life may still exist on this rock.

Meanwhile, billions of humans believe that other billions of their fellow rock-dwellers will not enjoy the same unprovable after-death experiences as themselves. Sometimes this involves eternal torment. Sometimes it may just involve something slightly less awful, like maybe having talk radio piped into one’s eardrums at low volume for a few millennia. No big deal. Either way, they’re rearranging crates on the Edmund Fitzgerald. It’s so important for people to be right about something they can’t prove, confirm, or even really imagine. It’s so important, that many are willing to die, or even kill over these beliefs.

And the Earth keeps spinning (albeit a little slower every day), and the sun keeps doing its furnace thing… and sometimes asteroids and comets zip past our heads, and sometimes they even disrupt Russian traffic. The universe has plenty of ways it can kill us. And it might. In fact, given enough time, it WILL. This is pretty much certain.

And we humans may be reaching breakthroughs soon on longevity, but for now, a century is generally the most we get, and usually a bit less. It may behoove us to make these centuries as pleasant as possible.

Or, I suppose we can fight and argue and strain and sacrifice and suffer in the name of what could happen – after we aren’t around to enjoy it. Somehow, musty texts written by committees over the course of centuries – often centuries after events they depict – are enough evidence to completely base one’s life on getting access to some celestial club. Nevermind that there are thousands of groups that claim to know the ONLY secret handshake to the ONLY secret club, and everyone else will fall through a trapdoor into a punji trap filled with agitated tigers and Ted Cruz, when they try to sneak past the bouncer.

Pockets of the world seem just a little more willing to see each other as people. Some places, often (but not always) in cold regions where people are named Sven, focus their efforts on clean energy, equal opportunities for historically oppressed groups, and truly awful seafood dishes. These people get it. Sure, some still think that a magic sky daddy is going to harshly judge darker skinned people, but the lands of Ericsson and Volvo mostly seem to understand that making the world more livable now tends to maximize human happiness. Go figure.

It’s not just the people of the fjords that have their heads screwed on straight. But they’re a good example.

A few times zones away, the nation-state with by FAR the longest reach in human history (Voyager 1, trillions of dollars of GDP, and thousands of nuclear missiles fits a few disparate definitions of this), is currently running a reality show to determine who’s going to be hated by half the planet, and have the power to bomb those assholes into oblivion, then bomb the rubble into smaller oblivion. Whew! Now that’s a run-on sentence.

It’s also scary, knowing that pretty much all of the contestants of this show believe, or claim to believe, that their death means somehow that the known laws of time and space will bend just for them, and they will be transported to a dimension of, um, well… whatever makes them happy, I guess. Jeb Bush will be surrounded by his family, and money, and will probably have more energy. Chris Christie will have all his political enemies tied up for him to personally torment. Ben Carson will know about more things than just medicine. And presumably Ted Cruz will be surrounded by thousands of Tickle Me Elmos for him to caress. I mean, I just assume. Look at that creep. Gah.

Anyway, the fact remains that the people who most want to control half the planet’s nuclear arsenal believe that magic awaits them and they will never really die, and people they don’t agree with will be tortured forever. Yeah, this is a good idea. Let’s vote for these unreasonable lunatics.

I don’t know. Maybe dogmatic religious fundamentalism isn’t what’s holding humanity back. And maybe one day I’ll stop discussing why Ted Cruz is so damn punchable.  But until we reach that distant temporal point, I would argue that perhaps we as people should worry more about the here and now, and how we can lift each other up. You know, rather than telling each other why eternal damnation is on the docket.