The Only Thing We Have To Fear… 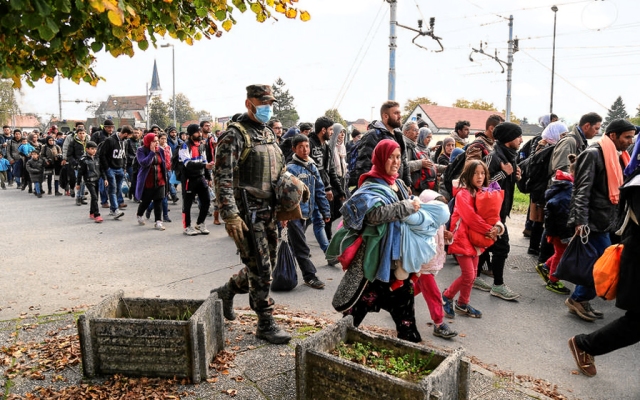 Since 2011, the nation of Syria has been in flames.

While much violence occurred during the uprisings of the Arab Spring, it was specifically Syria where the violence turned into an all-out war. Since 2011, more than a quarter million people have died, and around half of the 22 million citizens of the country have become displaced from their homes. Infrastructure and services have been obliterated. And millions of now-homeless people have become refugees. Syria is near Europe, and the Europeans have, with varying degrees of enthusiasm, taken the brunt of the exodus from what is basically a pile of rubble that people continue to burn down.

However, the United States is in many ways the ultimate immigrant nation, and has long been a destination for refugees from all corners of the globe. We admit 50,000 or so people each year claiming refugee status. The United States has a robust system for admitting immigrants, a thorough vetting process (more on that later), the world’s largest economy, and plenty of room. We are ideally suited for assisting Europe and the Middle East with the Syrian refugee crisis, and many politicians (including the Democratic nominee for president) have recognized this.

Of course, there are those in the US that are objecting strongly to the potential influx of Syrian refugees. Ordinary citizens have expressed concern about the potential for terrorism. Republican politicians have spent enormous amounts of time and effort frightening Americans with tales of Islamic terror.

So, there are still people freaking out about Syrian refugees. Many have claimed they haven’t been “properly vetted.”

Much of the anti-refugee rhetoric has mirrored the general anti-immigrant sentiment coming from certain aspects of the Republican party, as well as the right-leaning parts of the media.

While FBI director James Comey acknowledged the system isn’t perfect, the process itself is highly intensive – far more than in any other country.

Since 9/11, the entire refugee background check process has been overhauled and enhanced. It can take anywhere from 18 to 24 months for an individual seeking refugee status to actually be cleared and admitted into the general population. That’s up to 2 years. Multiple checks and references are made, and there are plenty of interviews as well. It’s truly in-depth.

There is an excellent step by step explanation of the entire process here.

Furthermore, fully half of all individuals seeking refuge are eventually turned back. It’s not as if going through the whole process is any sort of guarantee to admission. All of the aforementioned steps inevitably weed out quite a few individuals throughout the process. If anything, there can be an argument for the process being a little too stringent.

Fears of potential troublemakers within the refugee population are generally unfounded. Most of the refugees coming from Syria are women and children, for starters. Only 2% are men of “combat age.” And there has been no evidence to suggest that a significant percentage of the young men are inherent risks.

Any group of people will have its bad apples. It’s ridiculous to imply that the bad apples that may be speckled in among the Syrians would be any worse than the bad apples among any other refugee groups.

I’ve spoken with those who are critical of allowing refugees to enter the country. Many of them aren’t inherently xenophobic. Many have stated that they simply want their children to be safe. How does one argue against that? Of course we want our children to be safe. And when all somebody sees on the news is war, terror, crime, and fear… well, it’s understandable why Syrian refugees can seem scary.

Political figures who have been opponents of refugee admission have appealed to those emotional responses. They emphasize the dangers posed by potential extremists. People like Donald Trump want you to be worried about your children. But it’s not because he cares about your children. His entire campaign, and now the entire 2016 GOP platform, it’s based on fear. Fear of Muslims, Mexicans, Black Lives Matter, China, crime, and terror. Fear of the Other.

Many people are uncomfortable with their place in the world. Many people are scared of change. Trump has tapped into that fear, and has legitimized the ugliness that is often generated by those fears. When people are afraid, they’re more likely to respond favorably to a strongman figure. Authoritarianism suddenly feels safe. In fact, it doesn’t feel like authoritarianism at all to many.

Here’s the thing. Your children aren’t in any danger from refugees. No more than they are in danger from a multitude of homegrown threats. Adding more refugees to the population is actually more likely to aid a decrease in overall crime. Immigrants are statistically less likely to commit crime and mayhem than naturalized citizens.

It’s a lot more dangerous to walk among native American citizens than any group of refugees.

Since 9/11, around three quarters of a million refugees have been admitted to the United States, and a grand total of three of them have been charged with terror-related crimes.

American citizens have committed acts of terror at a higher rate than that.

The modern homegrown right-wing militia (and general extremist) movements have been responsible for more than twice as many deaths as Muslim extremists in the US since 9/11.

Gun violence kills more than 30,000 Americans every year. Homes with a gun stored on premises are significantly more likely to be the scene of a homicide or suicide. Your kids are in more danger of gun violence by a friend or family member (or themselves) than from Syrian refugees.

It’s not just crime, though.

In the last few years, vehicle collisions have been outpaced by firearms as a killer of Americans. Nevertheless, a little more than 30,000 people in the United States die every year from more than 5 million total crashes. 2 and half million injuries occur from these crashes. And this actually represents a huge drop in fatalities (per capita) from the 1969 peak. Now, around 10 people die per year per 100,000 compared with 26 per 100k back then. But even with that drop, the equivalent of the population of Fairbanks, Alaska, dies every year in car accidents, and the population of Chicago is injured.

Even on a smaller scale, there are plenty of other threats more deadly to Americans than Islamic terrorism.

Nearly 100 people die each year from bee and wasp stings.

Worldwide, mosquitoes are responsible for more than 600,000 deaths a year. That’s the population of Denver.

Back to Americans, you know what else is dangerous? Furniture. 30 Americans die every year, and nearly 40,000 are injured, thanks to falls from chairs and tables, collapsing shelves, and so on. Maybe the GOP should open hearings against IKEA.

How about the flu? Yep, that common illness that so many people shrug off actually kills tens of thousands of Americans every year. In a particularly deadly 2004, 48,000 people died from the flu. That would completely fill most Major League baseball stadiums beyond capacity.

How about our diets? 610,000 Americans – the approximate population of Denver again – die each year from heart disease.

Perhaps we should worry more about what we feed our children, and how much exercise they get, than about ISIS.

I’ll admit to being a little unfair here. Terrorism is a real threat, and it has killed Americans. Obviously we should screen people who enter the United States. We should investigate to make sure they don’t pose a threat to our lives and livelihoods.

Guess what, though? We already do. Thoroughly. As mentioned at the start of this piece, it’s actually really difficult to declare oneself as a refugee and then gain entry into the US general population. Legitimate threats and an enormous tragedy helped spur this process.

At this point, the risk of death, destruction, and mayhem caused by Syrian refugees really isn’t what we should be thinking of. It should be the images of dead and injured children. Images of destroyed cities. Images of masses of displaced people, crowded on boats. These are the people we are arguing over. These are the people who have no homes, nothing to go back to. They are displaced from their lives. It is within our capability to help. It is something America has done for years. We have taken in more than 100,000 Iraqi refugees that were largely displaced by our own actions. We accepted 800,000 Vietnamese after the Vietnam war.

This is humanitarianism at its most basic. There are people we can help. We have a precedent of helping people. We have the means to do prevent and reduce risks from those people. There is even a strong national security argument for accepting more refugees. Relations with the Middle East as a whole are generally shaky for the United States. Many people from Muslim majority nations view America with distrust at best. Helping those displaced by conflict from that part of the world will help relations and understanding.

So, with all that said, what’s the hold-up? Is it cowardice? Is it politics? Is it the kind of gridlock that has defined Washington DC of the Obama Era?

Why are we still making excuses? The danger is minimal. The advantages are powerful. And the simple fact is that we have an obligation as humans to help those in need, when possible. Don’t turn your backs on those in need. Don’t succumb to fear and paranoia. That’s where the real danger lies. FDR warned us of that 83 years ago. It still holds true today.

As always here are further links explaining this better than I can:

3 Responses to The Only Thing We Have To Fear…