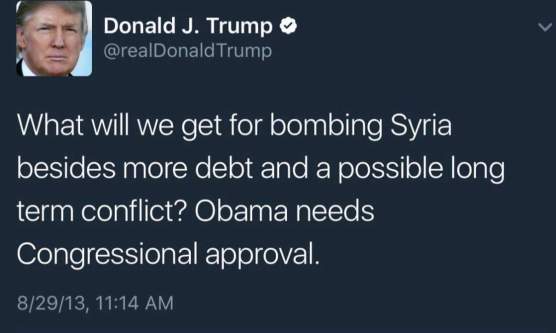 I’ve been on a bit of a posting hiatus lately. The day job has been busy, and my attention has been scattered. But I’ve gradually been piecing together drafts for posts, and will likely start posting regularly again soon. Hopefully on the boxing blog, too.

In the meantime, the world is giving me plenty to write about. Donald Trump, the man who keeps trying to break the concept of irony, just launched 59 irony bombs at an airfield in Syria. I want to talk about this, at least enough to figure out how it to pertains to Alanis Morissette.

Okay, first of all, let me first work out a timeline. I’m trying to get this mess straight here, so bear with me a moment…

Okay… that’s the timeline as I figure it off the top of my head.

Let this sink in. Especially the events from this week. Donald Trump used dishonest and bigoted arguments to justify barring Syrian refugees. He argued they were potentially dangerous, and even invented fictional terror attacks to help prop up his argument.

And then, when everything seemed to be going downhill for Donald Trump, he wasted millions of taxpayer dollars on what amounts to really expensive fireworks in order to “help” Syrian civilians… you know, future refugees.

Finally, in one last bit of depressing hypocrisy, he blames Obama for the current situation in Syria… that is, despite screaming against such an action four years ago. If I wanted to be charitable, I could use a different word. Instead of hypocritical, I could call it ironic. Still depressing, but definitely ironic. As we know, Alanis didn’t use the word quite right. Rain on your wedding day isn’t ironic as much as just being unfortunate. However, the man who railed at President Obama for being too aggressive with Syria just took irony and blew it up with Tomahawk missiles. When he insisted Obama get Congressional approval for military action… but then ignored Congress for his own attack, he kicked irony right in the junk.

He’s not just the amalgamation of an avaricious walrus and your creepy uncle, he’s also the real subject of Jagged Little Pill’s catchiest song.

Jokes about irony are how I keep from running screaming into the night. How I really feel is… well, less amused at irony abuse, and more… enraged. Seriously. This is more than just a political issue, or an issue of hypocrisy or irony. This is a moral issue.

If Trump actually cared about Syrian victims of Assad and ISIS, he would open our doors to those victims, not lob Tomahawks and then blame his predecessor for not doing the same. If those “beautiful children” mattered to Trump, he wouldn’t waste time and money burning down Syrian rubble. He’d give those kids food and shelter in a place that can handle them. Like say… here.

There is no moral justification for this. It’s entirely a cynical, political distraction. Trump has had a lousy run lately, and it seems convenient that he jumps on a single (admittedly awful) atrocity to fire weapons of war at an empty airstrip. And the “liberal media” is doing their part, scrambling over themselves to praise Trump. Nothing feels “presidential” like a few volleys of cruise missiles and a pithy speech about noble humanitarianism.

Meanwhile, his own party is doing their damnedest to prevent meaningful investigation into the Trump campaign’s potential collusion with a hostile foreign power (in an attempt to undermine American democracy). But that doesn’t matter now, because chemicals and Syria and whatnot.

So, irony is dead, or at least beaten to a pulp. Hypocrisy is at embarrassing levels. And the United States government is determined to spit in the eye of morality by turning their backs on those in need, and telling us all to look at the shiny explosions instead. And the gas attacks will continue, and refugees will remain stuck in limbo.

1 Response to Not quite like rain on your wedding day…